Dolce Far Niente #4: A Lot To Talk About

Hey loves,
So today, I want to post a bit of a more personal post. It’s been a while since I have done a Dolce Far Niente. The last one was in November of 2018 (lol). So, it’s definitely time for an update. Today’s topics will be Mental health, Gaining weight, University, My low buy of 2019 and other.

Quitting University & Mental Health
First of all, I would like to start with one of the more difficult issues to write about. University. As some of you might know from my previous Dolce Far Niente’s, uni life hasn’t been the best. For the last couple of years, I have been struggling with a generalised anxiety disorder. Slowly but surely, because of therapy and fighting against it, my illness has decreased dramatically. Once upon a time, I used to be scared of going to the supermarket and now, I actually work in one as a student. Which I’m very proud of and I sometimes forget how far I’ve come. However, certain things are still extremely frightening and paralyse me daily. 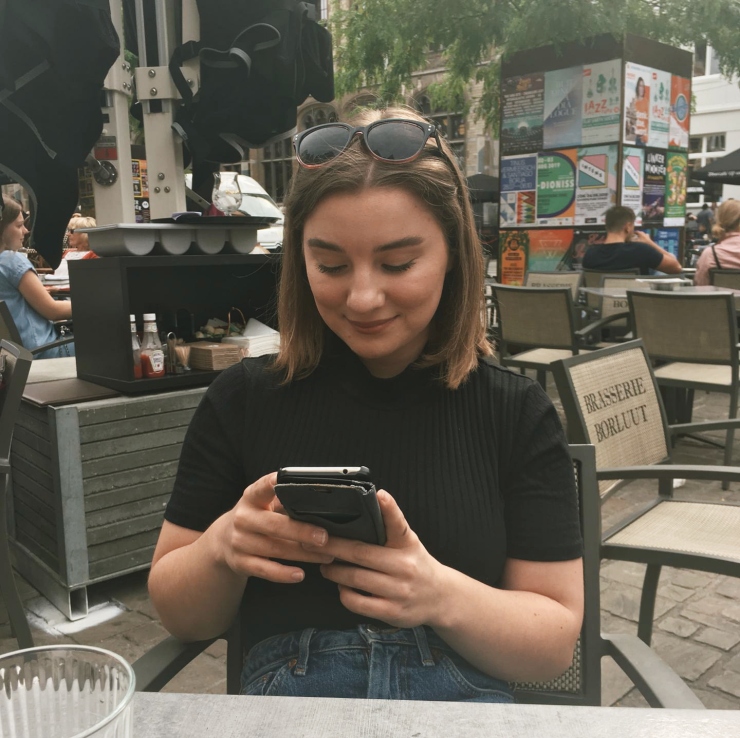 I went to university for a year and a half and tried two different degree program’s (There’s a better word for it but I can’t think of it). Firstly, I tried Political Science. Politics and everything surrounding it really interests me and I feel passionate about it. However, things turned out for the worse when I never spoke to anybody, never went to class and never studied. Classes were too theoretical and the professors were really stuck up. Like something was stuck in their arse. It lacked a personal atmosphere and equality between pupils. I could feel myself falling back into the pit where I crawled out of years ago. My anxiety and stress were through the roof and I wasn’t happy anymore. I felt like a complete failure and decided not to study for my exams. To fail because you’ve not studied is a more appealing excuse than to fail because you might be not intelligent enough. So I decided to change my program and in September of 2018, I started Linguistics and Literature, combining English and Dutch.

Turns out things were exactly the same. I was still dealing with all the mental health issues and I couldn’t focus on my studies. Every day was a day filled with stress, anxiety and fatigue. Eventually, I decided to stop studying in March of this year. The decision came after I became hysterical and sobbed on the street because I had to leave for university. I just had the biggest meltdown in years and I couldn’t do it anymore. I had to stop because I was too unhappy. I waited a week or two before I told my family about this. Some understood and some were worried. My boyfriend was present during my meltdown and all the other difficult times but he was very supportive. He told me that he’d rather see me work than study and be unhappy or depressed for the next four years. So that’s what I decided to do. I went to the place where I worked as a student and asked for a contract. Due to the legal system in Belgium, I was still able to work as a student depending on how many hours I had left. It’s a special kind of system developed for students who want to work. You get 475 hours a year and I still had plenty. So that’s what I have done until this day.

Nonetheless, I felt like I still wanted to get my degree. But this time, I wanted to take my time and really think it through. I didn’t want to rush into it because I felt the pressure of society.  I wanted to make sure I was content, stable and able to handle the pressure and anxiety. I wanted to work on my fear of failing things. That’s what I did whilst I was working. I made sure to take steps, as little as they were to become myself again. In June, I felt like I was ready to roam to the platform of study programs again. I had done some research in the meantime and found out that I was really intrigued and interested in Journalism. The current events and new developments in the world is something that I constantly love to follow. I love to write (hence my blog) and discovered that the Journalism Program ticks every box that I like to do.

It incorporates language, writing, following the news, video and image editing, and so on. I told my parents that I would love to visit an open day or info day of a few colleges in Ghent. Something I had never done with my previous programs. I fell in love with it. I was and am so excited about everything that I saw. The building, the people, the program, the classes, the assignments. So a few weeks later, I was registered at the school of my preference. It’s a College this time and not University. Things are less theoretical and you’re actually doing stuff. Honestly, I finally feel like I have made the right decision and everything about it feels good. I did not have this feeling with my other programs and I feel like I could genuinely decide what I wanted to do this time. I thought it through and did much research and I can’t wait to start doing it. So yeah, exciting times!

Gaining Weight
So the next topic is a bit confusing to write. Mainly because weight gain is usually associated with something negative. However, I feel positively and negatively about it. Anyway, let’s explain. So, as I mentioned before I’m quite a stressful and anxious person. One of my many refuges to escape that is food. The other is shopping. I’m quite an emotional eater. I could have a bad day and food is the consort. It makes me feel better about my day or myself. During that last year and a half, I have thus gained some weight. I don’t weigh myself because I don’t feel the need to but I remember the number of one of my last medical examinations. I think it was four years ago and I weighed 52 kgs. Taking my height into consideration that was rather healthy. I would say that I have gained about 2-3 kilos and I weigh 55 right now. Not bad at all and with most people, it wouldn’t even be that noticeable. However, due to my height (149 cm or 4’9), it is quite noticeable. The added weight hasn’t got much room to go to and I look chubby very quickly. Especially in the face. 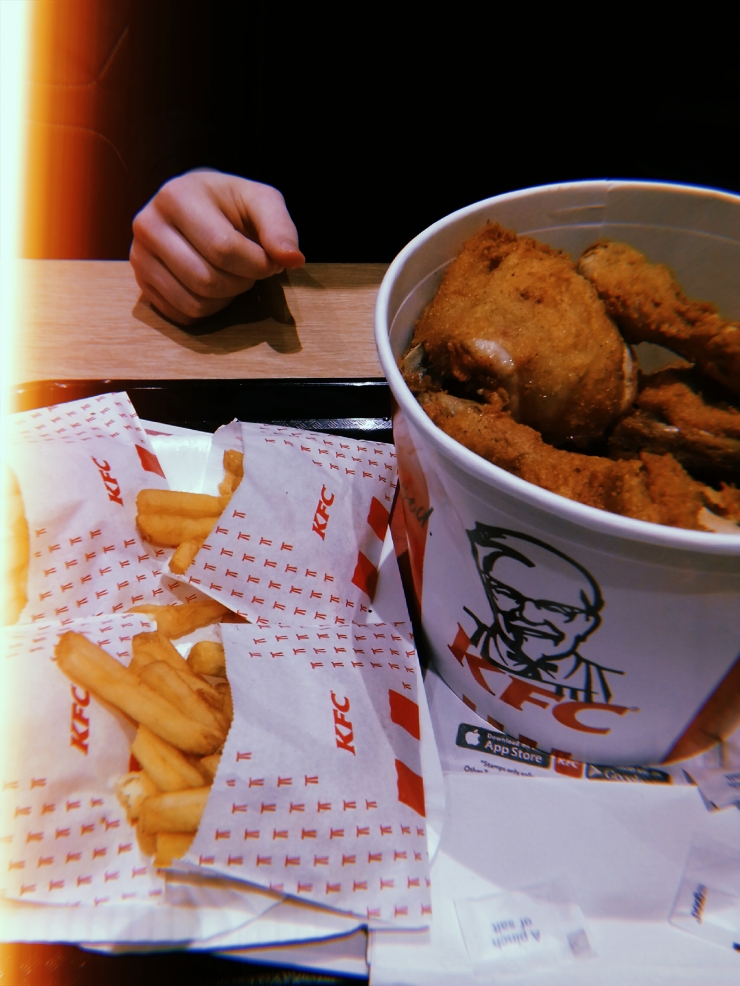 So people started noticing that I had gained weight and oh boy, the reactions of some people are quite exhausting. Some people act as if I will be obese within the next two years. Some act as if I will have a heart attack. And some people act like I’m not healthy in general. I get reactions when I eat a bit too much to their liking or when I take a second plate of a dessert. Just leave me alone, you know? I only gained a few pounds and that’s it. I’m not unhealthy, I don’t have diabetes and I won’t have a heart attack because of some dessert.

That being said, I don’t mind the weight gain but I do mind the overall feeling of being unfit. I’m a quite sporty person by nature and the feeling of being out of shape really aggravates me. I want to go running again. I want to walk up a stair again without panting two minutes after that. I really want to exercise again. I have bought some proper running shoes and an outfit and I can’t wait to get back to running. I finally have some time and energy after waking up at 5am and working at 6am every day for the last 6 (+/-) months.

Other Stuff
Honestly, I don’t talk about my family all that often because I like to keep that part of my life private. But I have been struggling a lot with one particular relative of mine. Actually one of my parents. I’ve been struggling so much that I have gotten even more sick and depressed at times and a few weeks ago, I had to make the difficult decision of leaving them. As long as I remember this person (We’ll call this person P of parent) has caused drama, been toxic and has been dealing for an eternity with an addiction. Alcohol addiction to be precise. Ever since I was a small kid, P has always managed to make me feel guilty about every single thing in my life. The clothes that they provided, the food they cooked, and other little things you shouldn’t feel guilty about. I could never criticise them about anything and to make matters worse P was always a very aggressive person with a lot of conspiracy theories. Throughout the last couple of years, I have started to become more aware of P’s behaviour in general and towards me. I was constantly walking on eggshells and weighing my words every time I spoke to P.

Last year, some things got out of hand and I decided to leave P. It’s not easy to leave one of your parents. However, the unconditional love that parents should provide wasn’t there and never has been. My environment was telling me to give P a final chance and to go back one more time. If things didn’t work out, I could be sure the next time. So that’s what I did and nothing changed. The fights still occurred and a few weeks ago I was left outside of my house. P didn’t let me in anymore. That’s also why I haven’t been able to create any new looks or reviews here. Therefore, I have decided to make a final decision and leave said parent for always. It’s not an easy thing to do and it has been very hard so far. Knowing that one of your parents doesn’t really care about you really hurts. But I will get over it. Hopefully soon. Leaving was the right thing to do for myself and my future.

That’s it for today’s post.
I hope you enjoyed this little update. A lot was kind of negative but I have many exciting things to look forward to like my degree in Journalism, living together in a dorm, exercising, freedom and so much more. I can’t wait to start school again, become independent and fit again. I hope all is well with you and I’ll see you next time.
Lots of love!

Belgian girl who is 20 years young and has discovered a passion for blogging a few years ago. I love to write reviews on various items of makeup and skincare, ranging from affordable to high-end. I also love making looks on Instagram!