Hey loves,
Highlighter has been all the rage for the last couple of years now and finding a good budget-friendly highlighter is usually a mission on its own.
I found this cute Catrice highlighter in my local drugstore and tested it out.
Let’s see if it is affordable AND glowy like the stars.

What Catrice says about the highlighter:

“Baked highlighting powder infused with minerals and light-reflecting pearls for a luminous look. Sheer and buildable coverage – for a subtle glow all over or illuminated accents on cheeks, temples or décolleté.”

The packaging of the highlighter is very simple, but it’s the inside that counts right? It’s a baked highlighter and I love the overall look of a baked highlighter, it looks so pretty!
The letters of drugstore packaging tends to fade after a while and this one is no different. However, it does not bother me!
As far as I’m aware, they’ve only come out with one colour: 010 Light Infusion. 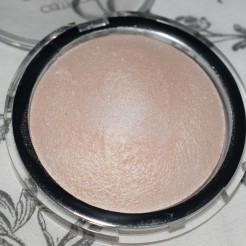 The colour of the highlighter might look neutral when you first look at it, but it does have a cool undertone and a subtle light-pink colour. One thing I immediately noticed, were the glitter particles in the highlighter and this kind off threw me off and even made me afraid to try it. Nobody wants to look like a disco ball, haha. The glitter is noticeable in the packaging and also on the face, but it’s not like you’re a walking head that sparkles. The formula is indeed buildable. You can go from a subtle glow to a BOOM glow in your face. Another thing I noticed, is that the highlighter is a bit dry, making it quite powdery.
So be careful while applying it!

I’m not a big fan of highlighter (wow shock all over the place) but I do like this one from Catrice and I like it even more because of the money it saves in my wallet!
The High Glow Mineral Highlighting Powder by Catrice is approved!

Lots of love and see you next time!